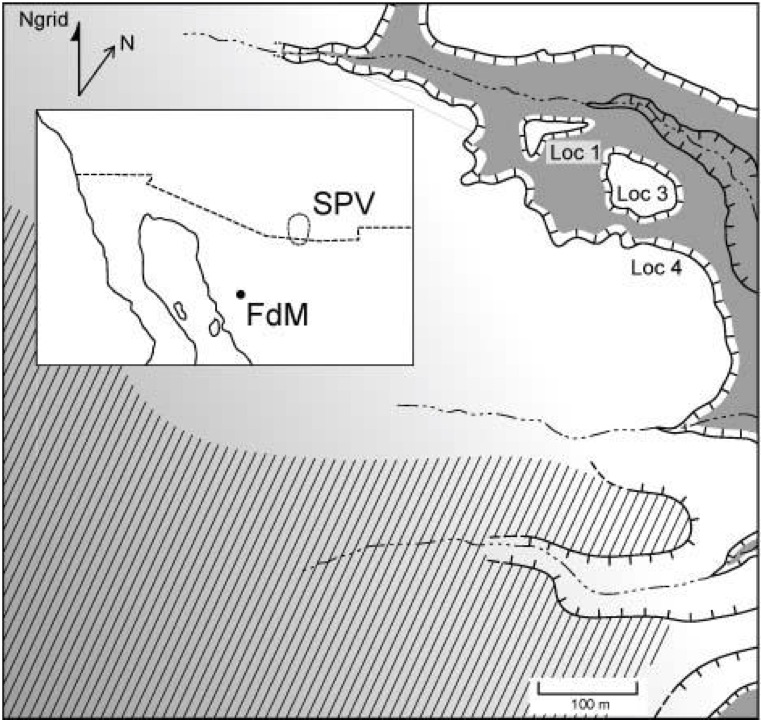 Figure 1. El Fin del Mundo with location of locality 1 (black area at east end is the excavation) and the area of the upland camps (cross hatched in lower part of map). Inset shows location of the site (El Fin del Mundo, FdM) in northern Mexico relative to the Clovis mammoth kills in the upper San Pedro Valley (SPV) of southern Arizona. 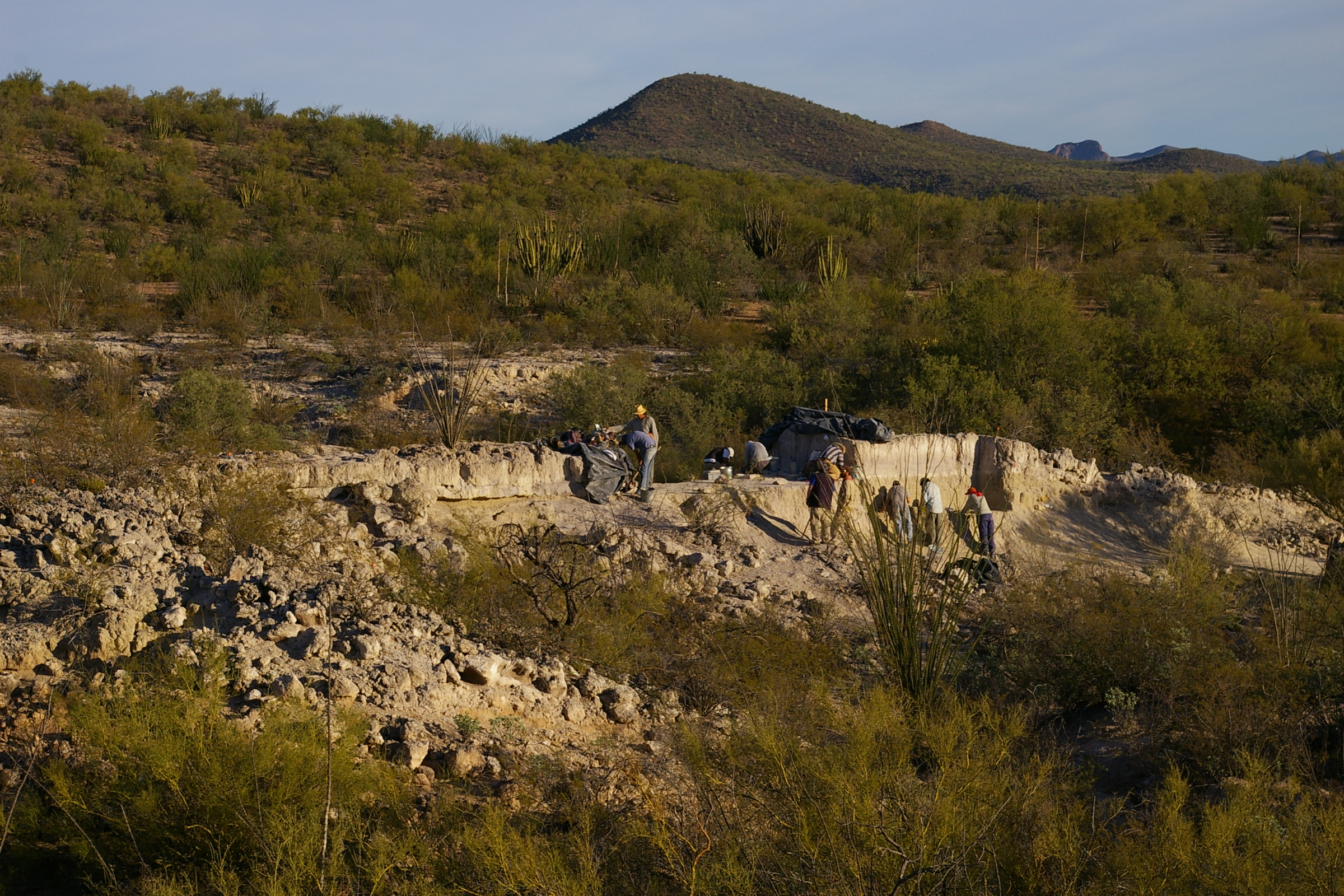 Figure 2. General photo of Locality 1 (looking northeast) with excavations under way during the first season. The flat surface within the locality that the excavators are standing on is the position of the bone bed. 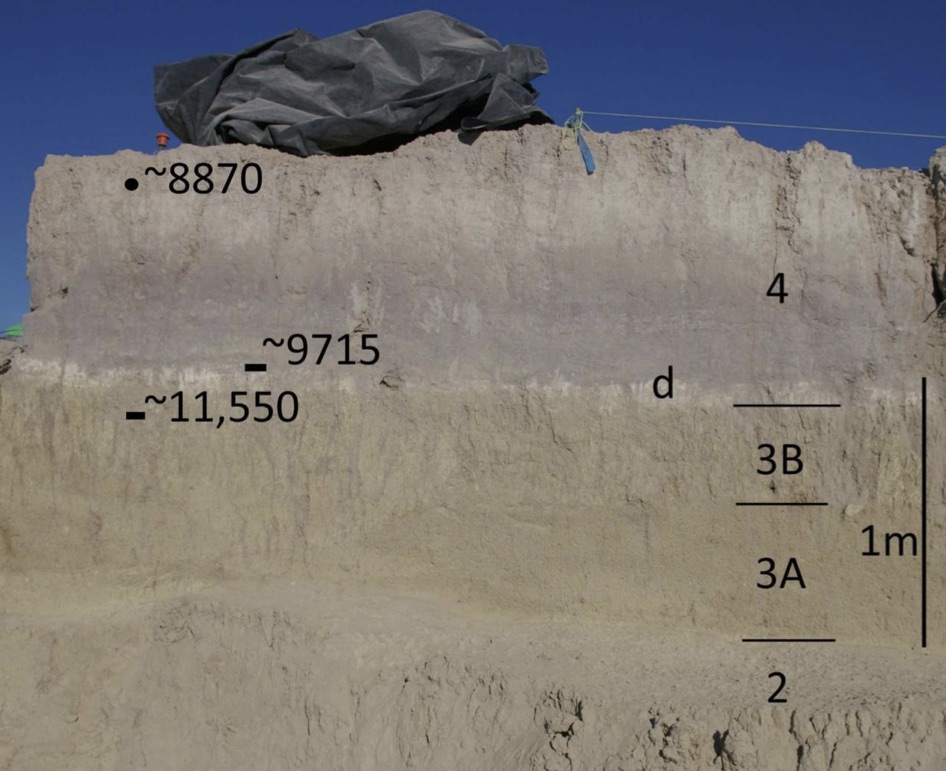 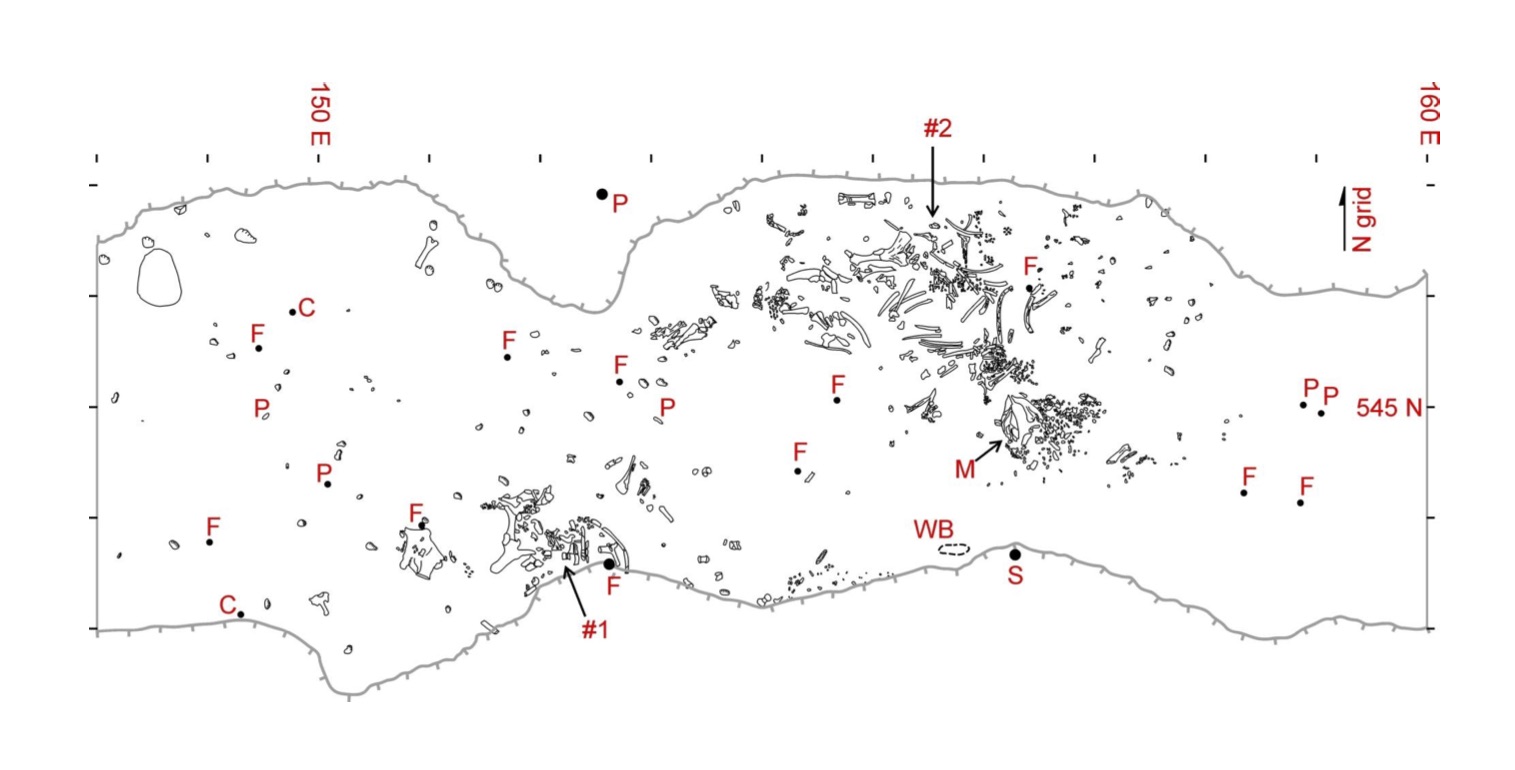 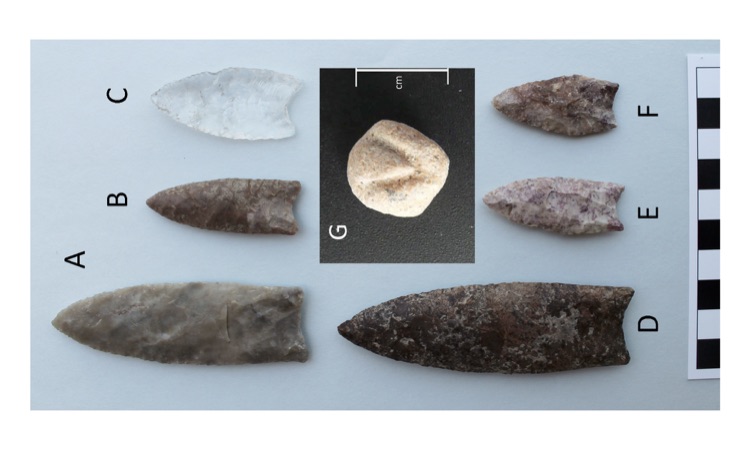 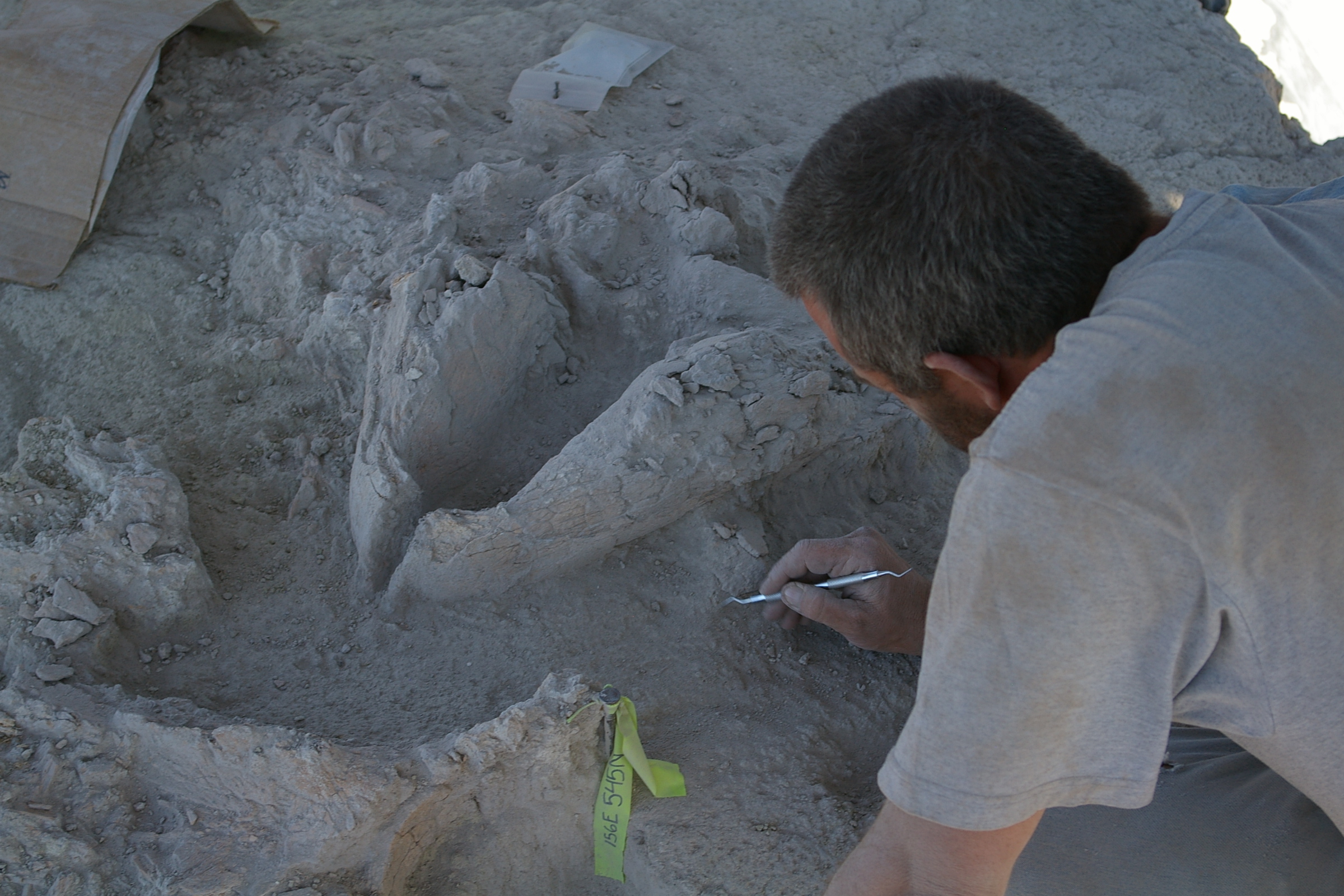 Figure 5. The mandible of Gomphothere #2 during excavation. The dentition, key to the identification of the species, was not exposed until some months after excavation in the lab. 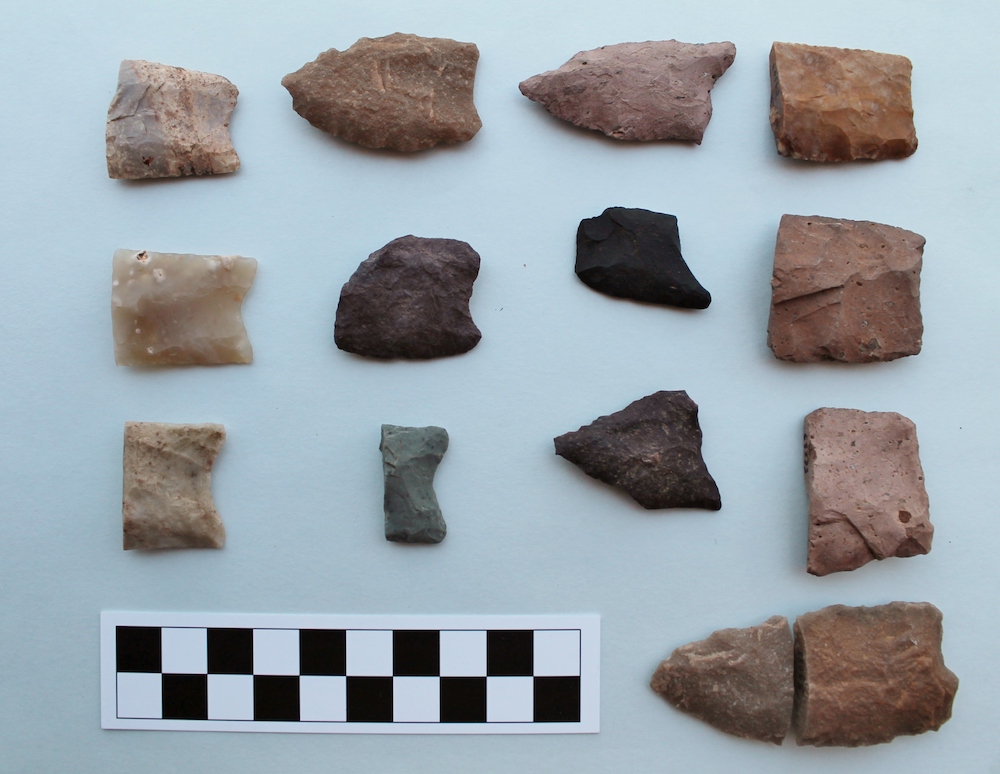 Figure 7: Artifacts from the upland localities.
Previous Next

The most important site that we have found in Sonora is El Fin del Mundo (end of the earth), discovered by an AARF/INAH survey crew in February, 2007, in a remote area of northwestern Sonora, Mexico (Sanchez et al., 2014). Stone tools, including a complete Clovis point, a uniface, and a biface were found in proximity to a stratified exposure (Locality 1) with the bones of horse/bison- and proboscidean-sized animals, tusks, and horse teeth. Several concentrations of bone were noted through the section, but the unifacial tool was clearly from the uppermost bone bed. The upper bone bed was therefore recognized as an archaeological feature. Because of the heavy erosion and obvious loss of much of the site, we immediately planned excavations. In our first field season, we also discovered a scatter of Clovis and likely Clovis artifacts, in Locality 5, on uplands ~600m from the initial artifact finds and the in situ bone. Subsequent surveying and testing on the uplands focused on this area and also expanded to other upland areas (Localities 6, 8, 9) (Figure 1).

The site (named – due to its remoteness) is located in a small intermontane basin within a chain of volcanic hills ~100 km northwest of Hermosillo, Mexico (~300 km southwest of Tucson). The site is exposed in an eroded landscape that drains the intermontane basin. The bone exposure is in a heavily dissected landscape covering an area of roughly 200m x 200m (Figures 1, 2). Dissection left the local basin fill exposed in head cuts and in a series of erosional islands. The bone bed and artifacts are from the lower part of lake and marsh deposits exposed on one of these islands (Locality 1; Figures 2, 3).

After four field seasons of investigations at the site, we have been able to recognize that it a complex site with at least ten important archaeological localities where Pleistocene people developed multiple activities; such as, acquiring lithic raw materials, tool knapping, camping, and hunting Pleistocene animals.

Several localities comprise the site. Locality 1 (Figure 1), the scene of the initial site discovery, contains two bone beds. The upper bed consists of the remains of two juvenile Gomphotheres (Cuvieronius sp.) (Figure 4, 5), an extinct elephant similar in size to a mastodon. Previously, gomphotheres were thought to have become extinct in North America around 35,000 years ago. During the 2011 season three Clovis points and a 3 cm flake were found in situ within the gomphothere hunting feature. An additional Clovis point was found under the gomphothere mandible in 2012. Two other Paleoindian projectile points --a complete fluted point made of quartz crystal and a complete reddish brown chert point-- were found near the bones, albeit from disturbed contexts. The Clovis points, flakes, burned bone and bone ornaments (Figure 6) within the bone feature found at the excavations provide secure evidence of a human association, and the projectile points strongly suggest that hunting was involved. A radiocarbon sample was obtained from charcoal found amid the bone bed. It was dated to 11,550+/-60 14C years BP (Sanchez et al., 2014). Five-hundred meters from locality 1 an extensive surface camp area (Localities 5,6,8,9; Figure 7) was identified with at least a dozen Clovis projectile points, 50 Clovis end scrapers, 20 blades and blades cores and a number of Clovis preforms and bifacial tools.

El Fin del Mundo is notable for a variety of reasons: it represents the first reported association of humans and gomphotheres of North America. The radiocarbon dating also makes El Fin del Mundo the oldest Clovis site in North America, along with the Aubrey site in north Texas (Ferring, 2001), which produced a radiocarbon date almost identical to the date from El Fin del Mundo (Sanchez et al., 2014). Additionally, this site allows us to consider various topics, such as environmental change, Paleoindian subsistence and regional interaction, the role that humans may have played in the extinction of Pleistocene fauna, and how early peoples adapted to the Sonoran region and used the available lithic raw material to manufacture different types of points. The investigations at Fin del Mundo are still ongoing, and we need to further investigate many of the localities that we have identified.