Survey and Testing in Sonora, Mexico 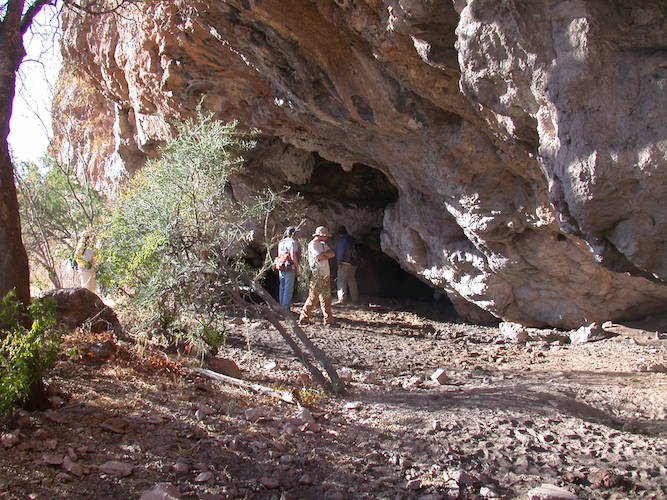 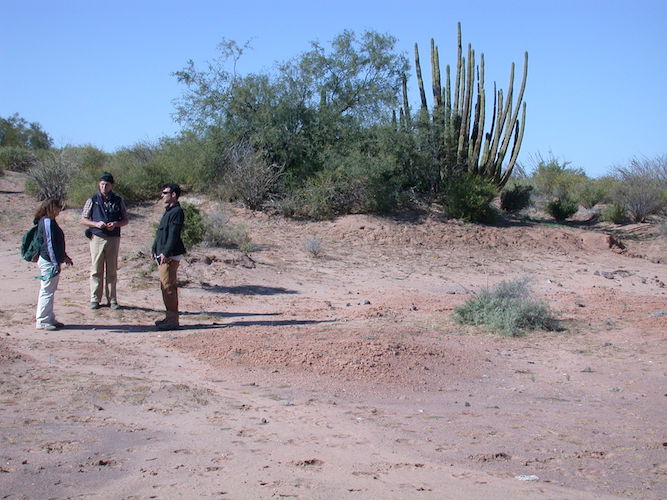 Dune ridge with buried soils (cropping out in the foreground and just in front of the organ-pipe cactus) along the margins of a large playa that produced Clovis artifacts.
Previous Next

The study of Paleoindian archaeology has a long history in the Southwestern United States (e.g., Haury et al. 1953), but we know considerably less about the early people south of the border in northwest Mexico. In Sonora in and west of the Sierra Madre Occidental, Manuel Robles of the Universidad de Sonora Museum, along with a group of amateur archaeologists, spent countless weekends in the 1960s and 1970s prospecting for archaeological sites, especially Clovis sites, in the region surrounding Hermosillo. Their efforts resulted in publications documenting 11 localities with Clovis affiliations within the state of Sonora (Robles and Manzo 1972; Robles 1974). They also focused on one particular site, El Bajio, for mapping and testing, in addition to surface collecting. Survey, testing, and excavation in northern Sonora starting in 2003 are providing much more detail on the Paleoindian archaeology (Gaines et al., 2009; Sanchez and Carpenter, 2012; Sanchez et al., 2015). Sanchez (2010) also provides a broader context for Paleoindians in the area by reviewing all of Mexico.

Testing along with site visits and interviews with collectors by Guadalupe Sanchez Carpenter and Edmund P. Gaines (sponsored by AARF and in collaboration with the Instituto Nacional Antropologie e Historia - INAH - Centro Sonora) provided invaluable data on additional sites and artifact finds (Gaines et al., 2009; Sanchez 2010; Sanchez and Carpenter 2012; Sanchez et al. 2015). These data are important for extending our understanding of Paleoindian landuse and site types in addition to Paleoindian technology, typology, and raw material preferences south of the better known sites and settings in Arizona. Below we summarize our data from the regional survey and our testing at El Bajio.

Two sites are located on the central coastal plain. Over 27 diagnostic Paleoindian projectile points have been collected from a dune field on the edge of a large playa at SON:N:11:20 (Sanchez 2001; Gaines et al., 2009). Seventeen of these points are classic Clovis, while 10 exhibit characteristics reminiscent on late Paleoindian technologies such as Dalton. Recent investigations at the site recovered stratified archaeological materials to a depth of 360 cm below the surface. Three fluted points are reported from site SON:J:16:8, roughly 20 km west of Hermosillo. Subsurface testing here identified the presence of at least 6.5 meters of alluvial deposits and a series of four buried soil horizons, underscoring the potential for intact, buried archaeological remains.

El Bajio: As of 2003, El Bajio was one of the very few and also the best known of the Clovis sites reported in Sonora (Robles and Manzo 1972; Robles 1974; Sanchez 2001). Several archaeological investigations have been undertaken at El Bajío. In 1975, Kenneth and Marian McIntyre, schoolteachers from Vancouver, Canada, conducted surveys and carried out surface collections and limited test excavations (McIntyre and McIntyre 1976). Between 1977 and 1981, Julio Montané Martí (1985), from the Centro INAH Sonora carried out a series of trench excavations in 10 different localities within the site and collected many artifacts from the surface. Unfortunately, neither of these studies was completed, and neither field notes nor reports are known to exist. However, ten boxes containing an estimated 300,000 artifacts (tools and debitage) recovered during these two projects are currently curated in the Centro INAH Sonora, but with very little information as to their contexts. Beginning in 1998, Guadalupe Sanchez, a graduate student in Anthropology at the University of Arizona and John Carpenter, with support from Elisa Villalpando and Julio Montané of the Centro INAH Sonora, conducted several, brief reconnaissance visits to the site, and began to organize and analyze the archaeological materials previously collected from the site and presently curated at the Centro INAH Sonora.

Preliminary site reconnaissance confirmed the distribution of Clovis artifacts in moderate-to-high density over an area of approximately four square kilometers. Some of these lithic materials are exposed on the surface or derived from shallow deposits lying immediately atop the granitic bedrock substrate. However, many of the artifacts were observed eroding from buried deposits in areas where the alluvial sediments vary from one to two meters in thickness. Although Clovis materials represent an important component at the site, other archaeological components are visible on the surface, including Archaic projectile points, groundstone, ceramics, and several hundred features represented by rock concentration. Given these aspects of the site, AARF-supported excavations began in 2003.

The analysis of artifacts was carried out by Guadalupe Sanchez (2010). Paleoindian materials were found over an area of four square kilometers, with at least 22 distinct loci identified. The tool kits of each locus are remarkably similar, sharing a wide range of tools used in various activities (blades, different types of bifaces, and unifacial tools). Thus, it would appear that these loci do not represent varied activities, but localities where the same general behaviors were carried out. The principal attraction of El Bajio likely was a raw-material quarry were high-quality basalt was removed for tool manufacture. The quarry was found near the summit of the south slope of Cerro La Vuelta, the highest hill in the area, located on the southwest corner of the site. The quarry is a vast outcrop with enormous lithic debitage dumps, some reaching 20 meters or more in length and up to 1 meter in depth. The quarry extends over an area of approximately one hectare. It is one of the largest Paleoindian quarries in the Southwestern U.S./Northwest Mexico. The location of some loci at one or more kilometers distance from the quarry suggests the possibility of additional activities at El Bajio. The high percentage of resharpening and reuse evident among the tool assemblage from some loci also is suggestive of long-term utilization of the area.