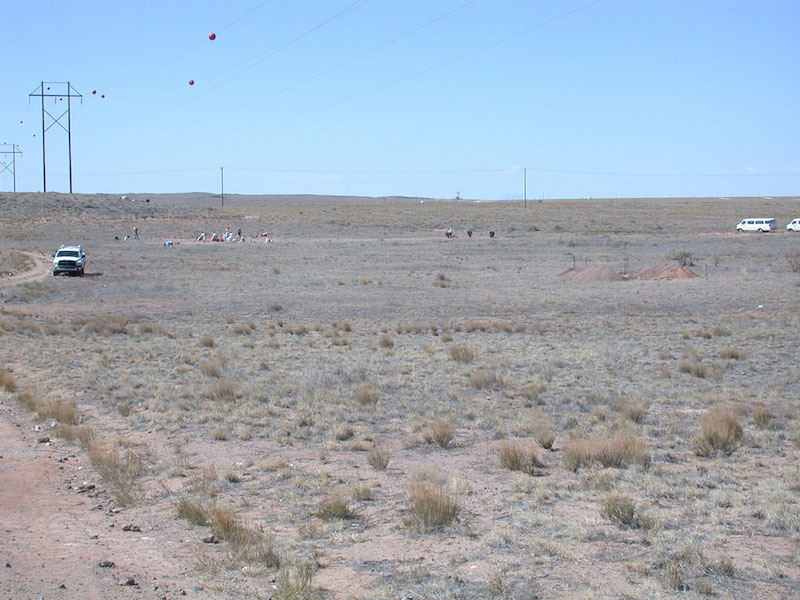 Deann's site in 2006, view south. The playa floor is apparent in the middle ground (note back dirt from trench at right). Excavations are under way at the Folsom locality on the far side of the basin. Basalt outcrops are apparent at left, just below the nearest power poles. (V.T. Holliday). 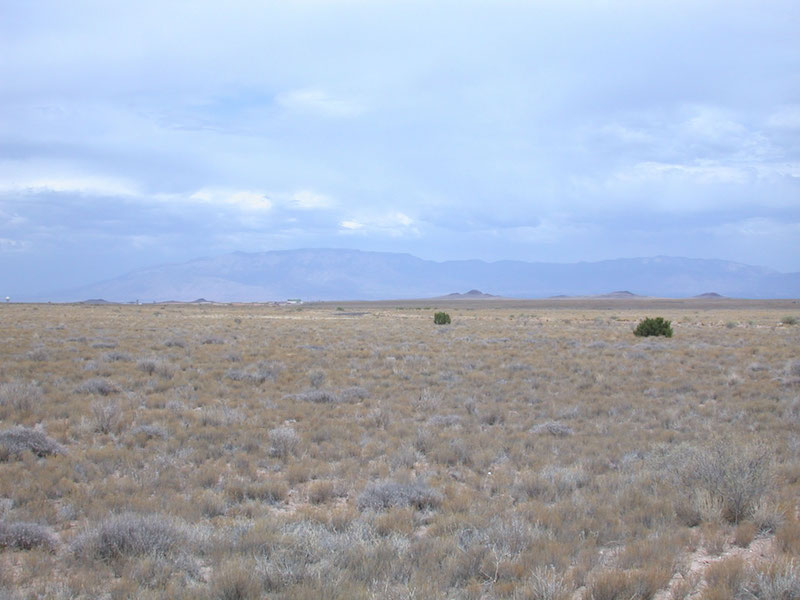 The West Mesa looking east across the Albuquerque Basin to the Sandia Mountains in the distance. The line of volcanic necks forming “The Volcanoes” in the area of Deann's and the Boca Negra Wash site are obvious across the middle distance. (V.T. Holliday). 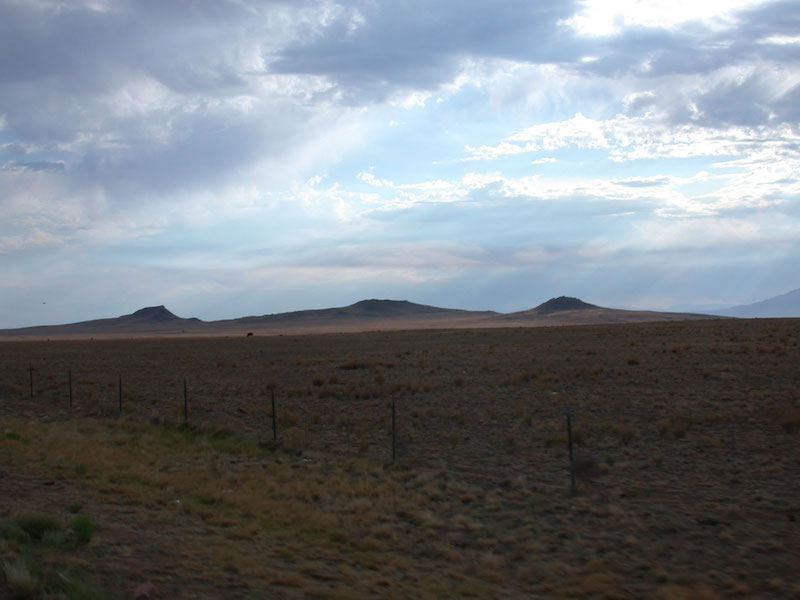 “The Volcanoes” on the West Mesa near Deann's site.
Previous Next

The Albuquerque Basin in the central Rio Grande Valley has long been known for its rich Paleoindian record (e.g., Hibben 1941; Dawson and Judge 1969; Judge 1973). Until recently, however, little has been known of the stratigraphic or paleoenvironmental context of the early sites. Part of the AARF research program has been devoted to a geoarchaeological assessment of the area as well as continued archaeological work at two sites in the area: Boca Negra Wash and Deann's Site, both Folsom camp sites (Holliday et al., 2006) . This work is in cooperation with Dr. Bruce Huckell, an archaeologist in both the Maxwell Museum and Department of Anthropology, University of New Mexico. Dr. Huckell is directing the archaeological work at both sites. The research at Boca Negra Wash (BNW) is a continuation of work begun in 1999 (Huckell and Kilby 2000). BNW is only the second Folsom camp to be excavated in the Middle Rio Grande Valley, following the work of James Judge and Jerry Dawson at Rio Rancho in the 1960s (Dawson and Judge 1969; Judge and Dawson 1972).

The West Mesa is a basalt-capped high terrace of the Rio Grande. Across the top of the basalt are sand sheets which contain the Paleoindian occupation levels. Judge (1973) recorded 36 Paleoindian sites on the Mesa, not including BNW and Deann's site , and a total of 59 Paleoindian sites throughout the Albuquerque Basin. No systematic geoarchaeological research has been conducted in the area, so another component of the AARF research program is establishment of both site-specific and regional late-Quaternary stratigraphy.

Both BNW and Deann's site are located along the margins of small playas or dry lakes (Holliday et al., 2006). The occupation zones are preserved on top of a late Pleistocene (~25,000 yrs BP) sand sheet strongly modified by pedogenesis and buried by a late Holocene sand sheet. Boca Negra Wash (BNW) consists of two short-term camp and processing areas. Both camps were likely set up here after successful bison kills around the playa, and were occupied for a few days while the Folsom people processed the animals they had killed, repaired their weaponry, and conducted routine domestic tasks. To date BNW has yielded approximately 1500 flaked stone artifacts and 180 faunal specimens (principally bison tooth enamel). Two rock types make up the bulk of the lithic assemblage: Pedernal chert and Valle Grande (Jemez) obsidian. Following a distant third is Chuska (also known as Washington or Narbona Pass chert or “Paleo-pink”), followed by Zuni spotted chert, petrified wood, quartzite, and a few cherts and quartzites likely derived from cobbles in the Santa Fe formation. Deann's site is also likely a short-term camp linked to a bison kill. 520 artifacts were recovered along with >100 pieces of tooth enamel (probably bison). The lithic assemblage at Deann's site contains the same type of raw materials recovered at BNW, differing only in relative proportions. The raw materials are dominantly locally available chert from late Tertiary alluvial deposits exposed along the western and eastern margins of the West Mesa. Nonlocal materials consist of two sources: so-called “china” chert available from the northeastern end of the Zuni Mountains, and Chuska chert.

A better understanding of the geoarchaeology and Paleoindian environments is coming from studies of the shallow playa basins that dot the West Mesa (Holliday et al., 2006). Most Paleoindian sites in the area are adjacent to these basins, so they are important to understanding the local setting for Paleoindian occupations as well as understanding regional paleoenvironments. Most of the basins apparently formed in depressions on the basalt surface, subsequently covered by an eolian sand sheet (Unit 1). At BNW the sand sheet is dated by OSL to ~23,000 yrs BP. Most of the basin fill at BNW is ~2 m of playa mud (Units 2 and 3) dating ~13,970 14 C yrs BP (17,160-16,140 cal yrs BP) at the sand-mud interface to ~2810 14 C yrs BP (~2960-2860 cal yrs BP) at the top. Above are late Holocene eolian sands and muds . Carbon and nitrogen extracted from the playa muds provide important clues to Paleoindian and subsequent environments (Holliday et al., 2006). C/N ratios suggest that the BNW playa basin probably held water more often during the Folsom occupation, while stable carbon isotope values indicate C3 vegetation was more common, as well, but C4 grasses became dominant in the Holocene. Cores extracted from four playa basins nearby (including Deann's site) revealed a similar stratigraphy and geochronology, documenting presence of wetlands on playa floors during the Paleoindian occupation of the area.