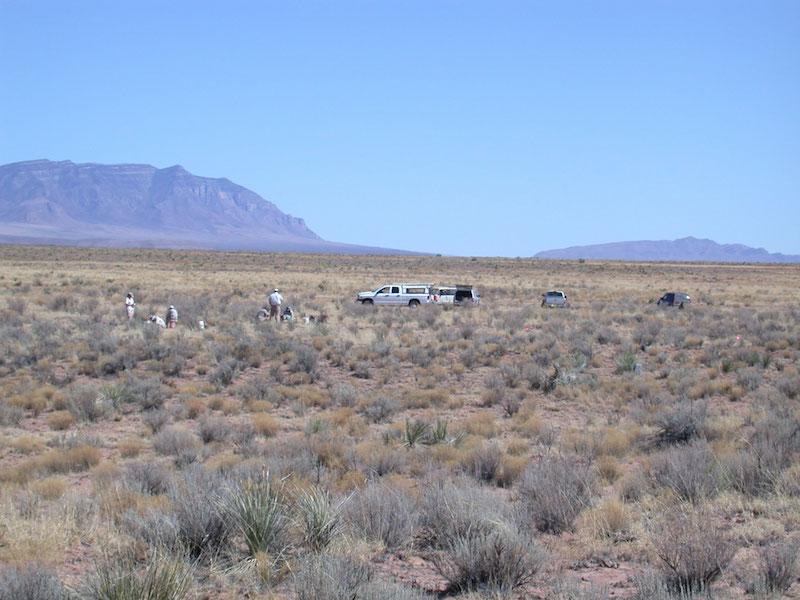 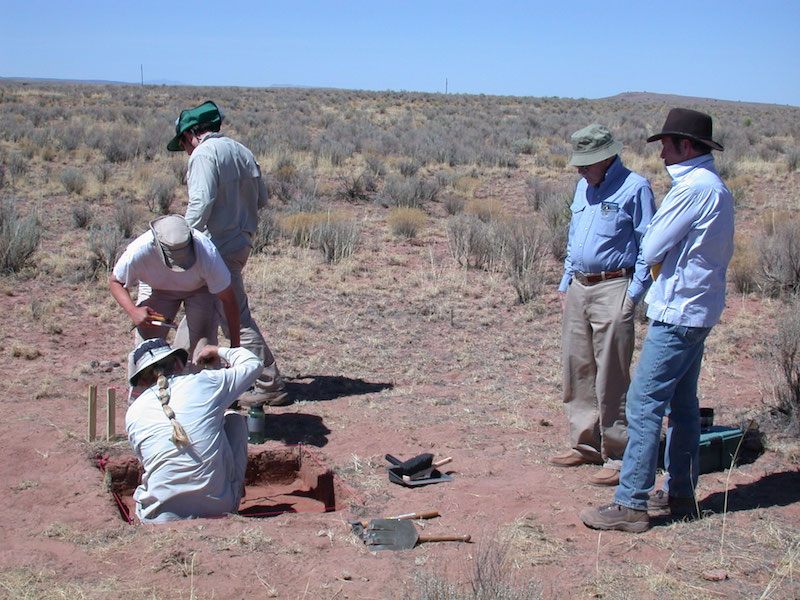 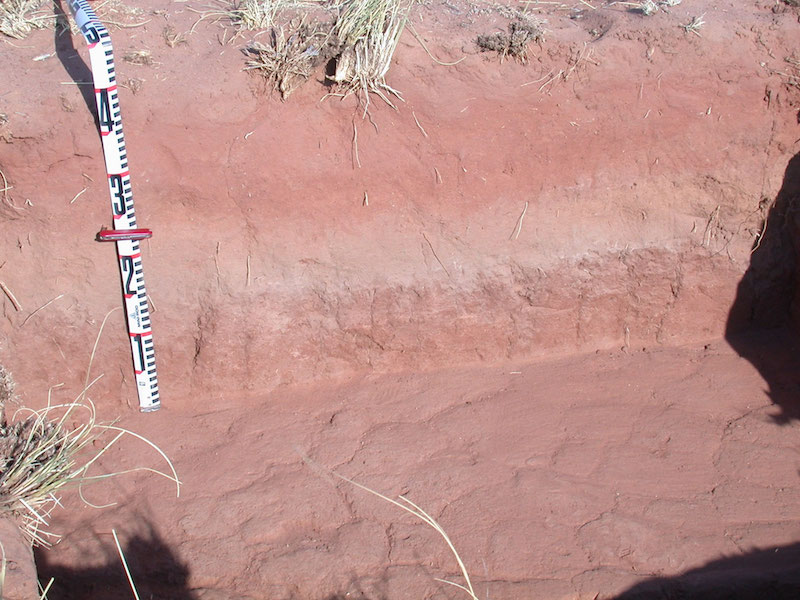 Stratigraphy exposed in the “swale” excavation. The surface sand has a reddish brown Bw over a striking and unusual Bg horizon (the pale olive gray zone). The Btb has strong prismatic structure, which shows well in both the vertical and horizontal section exposed in the square. The Clovis assemblage comes from the upper Btb. 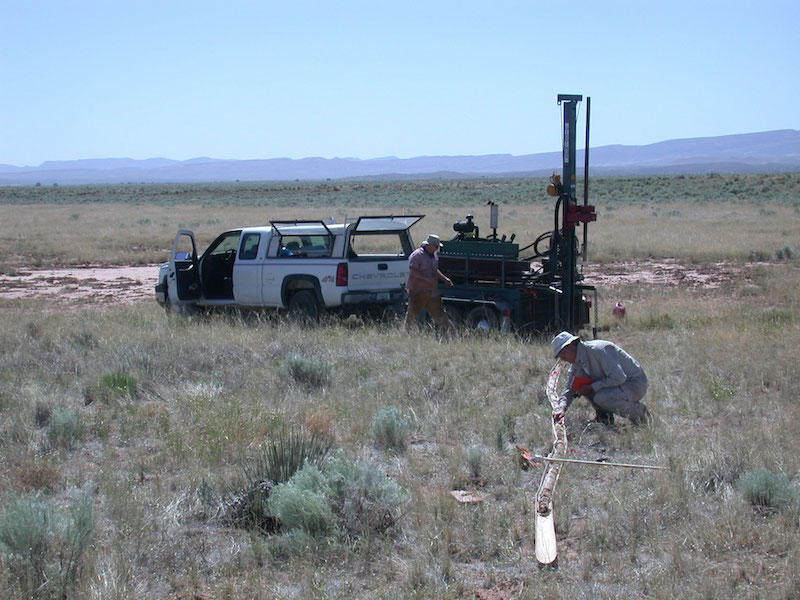 Coring in Chupadera Wash. View is to the northeast toward the north ridge of Mockingbird Gap (sage brush in middle distance) and Chupadera Mesa (on the skyline). 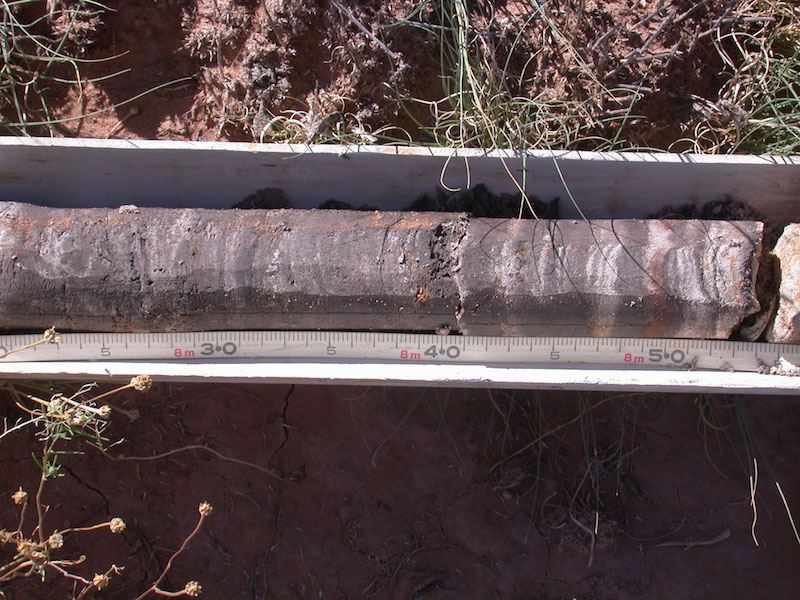 One of the cores taken in Chupadera Wash showing the finely-laminated organic-rich mud, gypsite, and sand, here over 8 m below surface. This section of the core dates to ~10,000 RCYBP.
...
Previous Next

The Mockingbird Gap site, ~40 km southeast of Socorro, New Mexico, is one of the largest and perhaps least known Clovis sites in the southwestern United States. It was discovered in the late 1950s (by RHW) in the desert grassland of the northern Jornada del Muerto, a structural basin just east of the Rio Grande. Surface collecting and detailed mapping of the site produced hundreds of Clovis artifacts—projectile point bases, fluted point preforms, end scrapers, gravers, and other flake tools—from an area 800 m by 80-150 m (Holliday et al., 2009). The site occupies a northeast-southwest trending ridge composed of sand and gravel, capped by s strongly developed gypsite/calcrete, and bordering the floor of Chupadera Wash, which drains southwestward to the floor of the basin (and likely drained into paleo-lake Trinity). The ridge is divided into northern and southern segments, separated by a broad, shallow swale that drains into the flat, untrenched floodplain of Chupadera Wash. Artifacts come from both segments of the ridge and from some areas of the swale. In the mid-1960s Weber contacted George Agogino of Eastern New Mexico University (ENMU) about the site, resulting in excavations on the south ridge (1966-1968). The site was determined to be largely Clovis, although scattered Archaic occupation and a small Ancestral Pueblo pithouse component were encountered. During and after the excavations, Weber conducted geological investigations on the site and along Chupadera Wash. Results were reported briefly (Weber and Agogino 1997; Weber 1997).

The 2005 archaeological investigations consisted of facing up portions of the eroded walls of the unbackfilled ENMU excavations. Eight 1.0 x 0.5 m units were excavated. Five units produced from 30-55 subsurface artifacts each—almost entirely biface reduction debitage—of probable Clovis origin, given that they are made of the same suite of jasper and chert materials as previously recovered diagnostic Clovis implements. This differentiates them from Archaic and Ancestral Pueblo assemblages. Two of the units yielded fragments of tooth enamel morphologically and metrically consistent with bison. All of the artifacts and tooth enamel were found in sand of likely Holocene age, based on the weakly expressed soil development. The primary Clovis occupation surface was not preserved on the south ridge.

In 2006 and 2007 the archaeological excavations concentrated on the northern side of the swale that separates the two ridges. Over the years, Weber found a large quantity of Clovis artifacts in this area where wind deflated the sand sheet down to resistant units. No artifacts were found where the sand sheet was intact. The situation indicated the presence of a buried occupation surface. Approximately 20 1.0 x 1.0 m units were excavated through the sand sheet. The work revealed that the sheet was composed of two layers of sand. On top is a younger deposit with a Bw horizon. Below the surface sand is an older sand with a Btb-Bkyb soil horizon sequence. The testing produced over 1000 artifacts, generally at the base of the surface sand. Most of the artifacts are flaked stone including a Clovis point base, a few biface fragments, some 20 flake tools, and hundreds of flakes, along with pieces of tooth enamel and occasional splinters of large mammal bone. Most of the flaked stone was debitage, representing a variety of different sources. Many flakes were clay-coated and from within the Btb or Bkyb horizons. While not diagnostic, these artifacts were of materials consistent with those used in the manufacture of Clovis tools at the site. A green toblack chert of variable quality was the dominant material, and at this time its geological source is not known. Socorro jasper, actually a silicified rhyolite available from a number of individual sources south and west of Socorro, was common. Nonlocal materials included china chert from the northeastern Zuni Mountains, two pieces of Mt. Taylor obsidian from the Grants area, and numerous flakes of Chuska chert from the Chuska Mountains on the Arizona-New Mexico border. China chert was transported over some 190 km, and Chuska chert over 315 km.

The results of three seasons of field work show that significant deposits of Clovis age are locally buried beneath eolian sands at the site in the area between the two ridges. On the south ridge in the area of the ENNMU excavations, the stone artifacts and teeth are not in primary context but the area still has the potential for yielding evidence of Clovis tool manufacture and subsistence activity. To the north, the swale below the northern ridge was the scene of considerable Clovis activity. Shallowly buried but minimally disturbed archaeological deposits exist here. We found no evidence of younger occupations. The areal extent of Clovis occupation within this large area is uncertain, but potentially is extensive. The sand plain in the swale between the ridges appears to have been geomorphically relatively stable since the late Pleistocene, in contrast to areas of Clovis occupation on the ridges.

Stratigraphic studies in Chupadera Wash adjacent to the site consisted of recovery of 15 cores using a Giddings soil-coring rig plus excavation of one bucket-auger hole (Holliday et al., 2009). Three of the cores penetrated >6.0 m. Above that depth the sediments include middle to late Holocene sand, gravel, and very dense clay. Below 6 m are 2-3 m of black, massive to stratified muds—indicating palustrine conditions—that yielded radiocarbon ages (on decalcified humates) of ~9900 RCYBP at ~640 cm depth and 10,600 RCYBP at ~900 cm depth. More muds are present below 920 cm, but we do not know their maximum depth. These data indicate that a marsh was adjacent to the site, likely providing resources that attracted Clovis occupants.

Our thanks to the New Mexico State Land Office and the New Mexico Historic Preservation Division, Office of Cultural Affairs for their support of our research, conducted under permit AE-112 (2005) and SE-239 (2006). In addition to AARF, the 2006 and 2007 investigations were supported by funds from the Maxwell Museum of Anthropology, University of New Mexico.