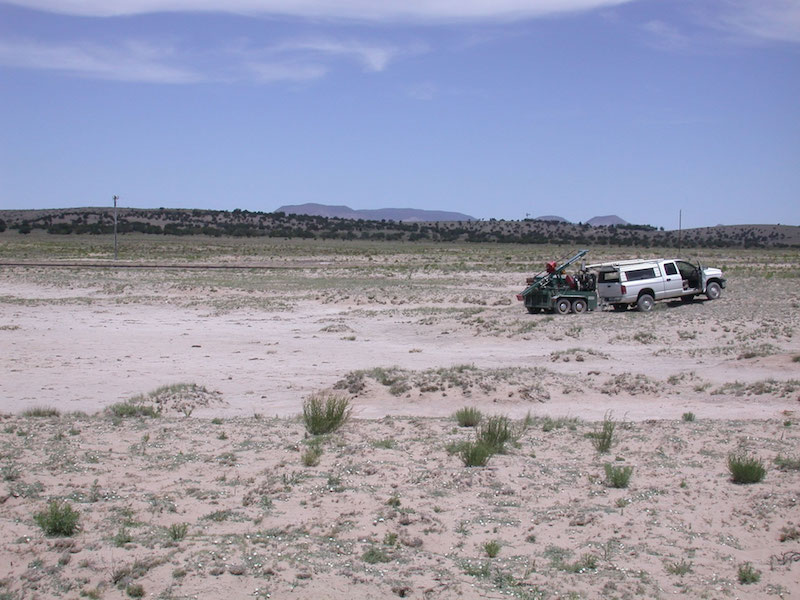 The Ake Folsom site in 2004. The truck is up on the flank of the 2105m shoreline. The southwest track of the VLA is visible in the middle distance. The 1978 excavations were in and along the margins of the flatter, eroded area. (V.T. Holliday). 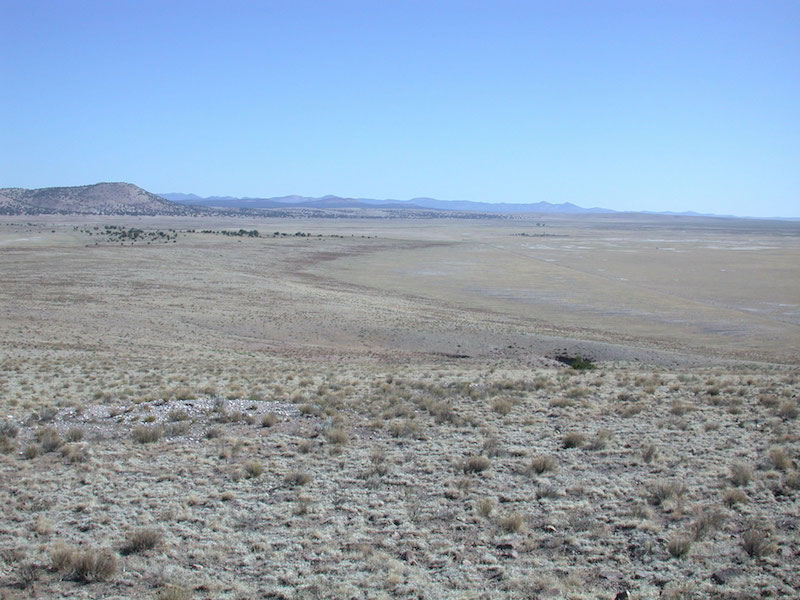 View north along the west flank of the C-N Basin. Large, prominent spit formed by 2116m paleo-lake is apparent to the left. In the distance, above and right of center of photo, as two isolated trees. They are just left of the Ake site. (V.T. Holiday) 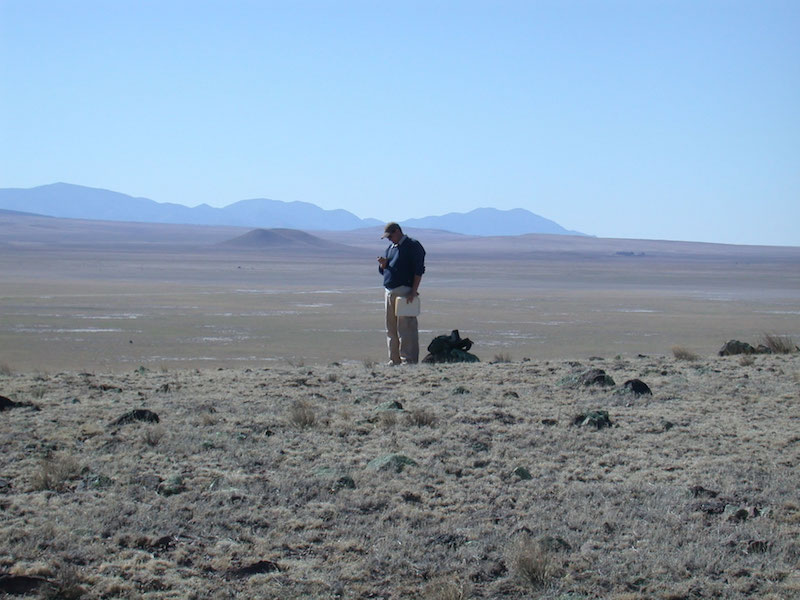 Matt Hill (UA graduate student in Anthropology) overlooking the C-N Basin during his survey of the area (V.T. Holliday).
...
Previous Next

Paleoindian Geoarchaeology and the Archaeological Potential on the Plains of San Augustin, New Mexico.

The Plains of San Augustin, most popularly known as the site of the Very Large Array (VLA) are in the San Augustin Basin of west-central New Mexico. The basin contained one of many paleo-lakes scattered throughout the Southwest in late Pleistocene time. As such, it was likely attractive to Paleoindian occupants and, indeed, extensive collections of Paleoindian artifacts are known from the area (Hurt and McKnight 1949; Amick 1995, 2002; LeTourneau and Weber 2004; Huckell, 2004; R. Weber, personal communication, 2002). AARF research (Hill and Holliday, 2011) has focused on several aspects of archaeology and geoarchaeology in the basin: 1) what is the relationship of occupations to paleo-lake levels and landforms; 2) how are Paleoindian sites distributed across the basin; and 3) what is the stratigraphic and geomorphic context of the Ake Folsom site, the only Paleoindian site in the basin subjected to excavation.

The Plains of San Augustin are on the floor of a structural basin formed along the southeast flank of the Colorado Plateau. The southwest-northeast-oriented basin is approximately 100 km long and consists of three sub-basins : t he main Horse Springs Basin, occupying the southwestern 70 km; the C-N basin in the middle; and the White Lake basin in the northeast. Most geologic work in the basin focused on: 1) cores at the south end of the Horse Springs Basin, first in a landmark study by Clisby and Sears (1956) and Sears (1961) and subsequently by Markgraf et al. (1984) and Johnson (in Phillips et al., 1992) or on 2) outcrops around the basin margin (Markgraf et al. 1984). Archaeological material is abundant around the margins of the Plains. On the far southwest end of the San Augustin Basin is the well-known rockshelter Bat Cave (Dick 1965; Wills 1988), but no Paleoindian materials are reported. A few scattered Paleoindian artifacts have been recovered from the old shorelines around the Horse Springs Basin (Hurt and McKnight 1949), but most Paleoindian materials come from the C-N basin. Additional data come from analysis of Folsom projectile points and preforms from privately owned artifacts collections (Amick 1995, 2002; LeTourneau and Weber 2004). The distribution of sites indicates that the Clovis and younger occupations took place after the lake receded from its highest level (i.e., below 7050 ft) (Weber 1994, personal communication, 2002). The Clovis and Folsom sites in the C-N basin appear to be associated with marsh deposits, and the Folsom and younger materials in the White Lake Basin are in eolian sands. An initial assessment of the sites in the San Augustin Basin indicates that many are from deflated contexts. This is especially the case for the White Lake Basin.

The Ake Site: The Ake site (LA 13423), on the northwest side of the C-N Basin, is the only excavated Paleoindian locality in the San Agustin Basin. It was found and tested ahead of construction of the southwest arm of the VLA. The site was excavated in 1978, yielding evidence for Folsom and several later occupations (Beckett, 1980). The Folsom material was recovered from a redeposited context, however. Because the final report on the site (Beckett, 1980) is not widely available, and in an attempt to better understand the site setting, we revisited the site (2003, 2004, and 2005) for additional stratigraphic work, including coring (Holliday et al., 2006).

The original site area was on the 2105 m paleo-lake shoreline. Excavations focused on the old shoreline and adjacent eroded surfaces. Among the artifacts attributed to the Folsom occupation, archaeologists recovered fragments of seven Folsom points, two channel flakes, and a utilized flake, all made of non-local chert and chalcedony (Beckett, 1980).

Our coring on the beach ridge reproduced the stratigraphy reported by Weber (1980). From the top down, the profile consists of:

Our research provide data that helps explain the location of the Folsom occupation at the Ake site. Before and during the Folsom period (generally dated ~10,900-10,200 14 yr BP) a marsh or wetland likely existed on the floor of the C-N Basin adjacent to the 2105 m shore line. The beach ridge would have provided a well-drained setting for living adjacent to a rich resource. A similar setting is reported for Paleoindian sites in the Bonneville Basin of western Utah (Oviatt et al., 2003).

Artifact Inventory and Basin Survey: In 2006 we initiated we initiated two undertakings pertaining to the regional Paleoindian record in the C-N and White Lake basins: 1) an inventory of all Paleoindian artifacts collected by geologist Robert Weber in the area; and 2) a systematic pedestrian survey. Weber began collecting artifacts from the project area in late 1950s and made repeated (often annually or more frequent) visits to the eastern portion of the San Agustin Basin. His efforts resulted in the identification of 75 archaeological and 20 paleontological localities. Despite multiple visits to sites, the majority (81%; n=61) of Weber's Paleoindian localities consisted only of an isolated projectile point or small number of diagnostic artifacts. Just 14 (19%) localities produced evidence for multiple Paleoindian artifacts, including diagnostic points, preforms, channel flakes, and other tools. Our inventory of Weber's collection identified 87 projectile points and preforms, 23 scrapers, 5 gravers/drills, 3 bifaces, 25 channel flakes, and 67 flakes and flake tools. Various Paleoindian and later diagnostic projectile-points and preforms types are represented in the assemblage, including Clovis (n=13), Folsom (n=30), Agate Basin/Hell Gap (n=2), Plainview (n=7), Cody/Scottsbluff (n=22), Angostura (n=1), and unidentified point fragments (n=10). In addition, five Archaic points (i.e., Bajada, Chiracahua, Jay, Pinto, San Pedro) and two unidentified non-Paleoindian points were recovered.

The 2006 pedestrian survey covered 965 acres. Surface artifacts, including Archaic and Formative period remains, were associated with 6 of the 11 Weber find localities, but only 3 localities produced additional Paleoindian diagnostics (a Cody point and several channel flakes). A newly identified site included a possible Paleoindian projectile point fragment, and several scrapers and flake tools at this site might represent a kill/butchery locale. All other cultural remains identified during this survey likely related to Archaic (Early and Middle) and Formative period occupations.

From the 2006 fieldwork in the San Agustin Basin we can draw several preliminary conclusions. First, most Paleoindian remains in the San Agustin Basin are isolate finds, and the sites with multiple artifacts are multicomponent palimpsest deposits. Second, based on either the number of components or diagnostic artifacts, the most intensive Paleoindian occupations date to the Folsom and Cody periods. Third, both limited-use (e.g., kill/butchery) and at least seasonal short-term residential localities (e.g., camps) are probably represented in the basin. Finally, our initial raw material analysis suggests that while some long-distance sources (e.g., Edwards, Chuska, Rancheria, and possibly Alibates) were used by site occupants, locally available tuffs, chalcedony, and rhyolites predominate in the Paleoindian chipped stone assemblages. It appears that Paleoindian foragers in the San Agustin Basin practiced a land-use strategy similar to that elsewhere in the American Southwest, in which intermountain basins were used as seasonal residences, and groups had moderate mobility and heavy reliance on locally available lithic raw materials (Amick 2002; Judge 1973).

Acknowledgments: We thank Dorothy Ake and Travis and Tammy Kiehne for access to the Ake site and their ranch, and for their generous hospitality during all of our field work. We also thank Johnny Hand, Bill Ferranti, Lew Serna, Dave Finley, Dave Love, Philip Busker, and Margaret Beck for their assistance during the 2006 survey and for sharing information about the San Agustin Basin. Vera Markgraf and the late Platt Bradbury also provided encouragement for this work and kindly shared their considerable knowledge of the region.

Huckell, Bruce B. (2004) Clovis in the Southwestern United States. In New Perspectives on the First Americans , edited by B. T. Lepper and R. Bonnichsen, pp. 93-101. Center for the Study of the First Americans, College Station, Texas.